What Peter Drucker Would Be Reading 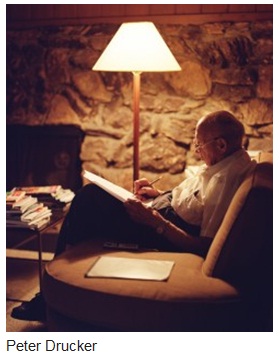 Recent selections from around the web that, we think, would have caught Peter Drucker’s eye:

1.       Phasing Out Fannie Mae and Freddie Mac: Is It Being Done Responsibly? Not many of us have warm feelings for Freddie or Fannie, but they’ve been around for a while, and replacing them isn’t easy. A new post at Knowledge@Wharton has a recommendation for how to take care of mortgage financing in the future: Do as the Danes do. “In the Danish model, every mortgage security is a bond that is a liability of the firm issuing it,” the post explains. “The Danish mortgage banks issue separate bonds for each type of mortgage, and if one of them experiences a high loss rate, all the resources of the bank are available to deal with it. There has never been a default on a Danish mortgage bond in over 200 years.”

2.       Household Income Sinks to ’95 Level: Employment may be modestly rising, but most households are having to tighten their belts more and more. In 2011, annual household income fell for the fourth year in a role, to an inflation-adjusted $50,054. The Wall Street Journal is unsparing in assessing the implications: “The income of the typical U.S. family has fallen to levels last seen in 1995, a long and pernicious slide that likely means it will be a generation before Americans regain the peak income levels reached at the close of the ’90s.”

3.       Making Better Decisions—Bees Do It: Making decisions is about the most important thing that a manager does. But very few of them have ever had a class in how to do it. In fact, argues Dalip Raheja in Bloomberg Businessweek, “decision making has never been identified as a critical competence,” which means that we’ve never become sufficiently systematic about teaching it. Raheja recommends rethinking how we view decision making and creating an analytical framework for it: “CEOs can use this framework to determine how they would make decisions prior to making them, create some decision rules and pass them along to the rest of the organization to follow.”

4.       The Dx Comment of the Week: Yesterday, when we asked whether knowledge worker supremacy was the key to restoring U.S. competitiveness, reader Sergio, citing a passage from W. Edwards Deming about how competition can be destructive (“It would be better if everyone would work together as a system, with the aim for everybody to win”) wondered if viewing the world economy through the prism of competitiveness is appropriate to the times:

This raises the interesting question of what we mean by increasing a nation’s ‘competitiveness.’ The answer may conflict with the global ‘system’ that helped it to reach this status in the first place.

Joe’s Journal: On Learning How to Learn Next »

Joe’s Journal: On Learning How to Learn 2012.11.22by 〉
Facebook Twitter Me2day
Up Down Files Print
●? Select Editor
✔ Textarea ✔ WYSIWYG
?